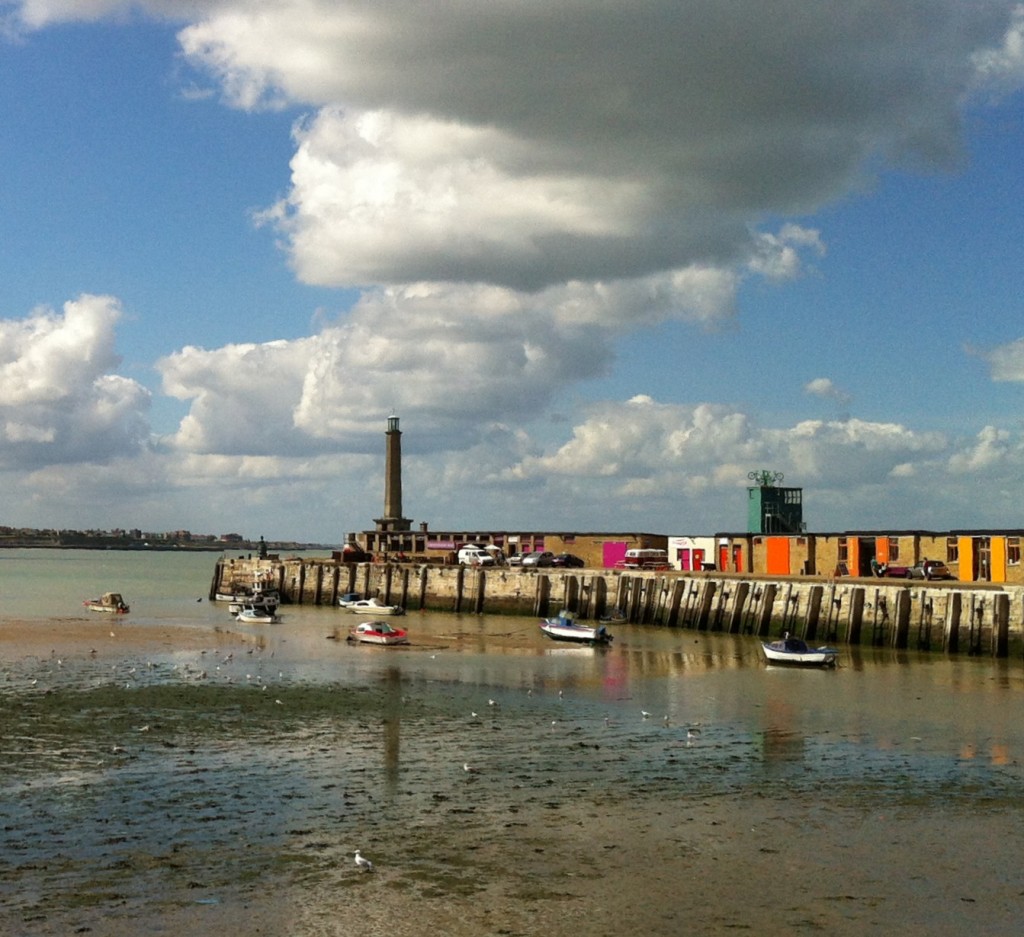 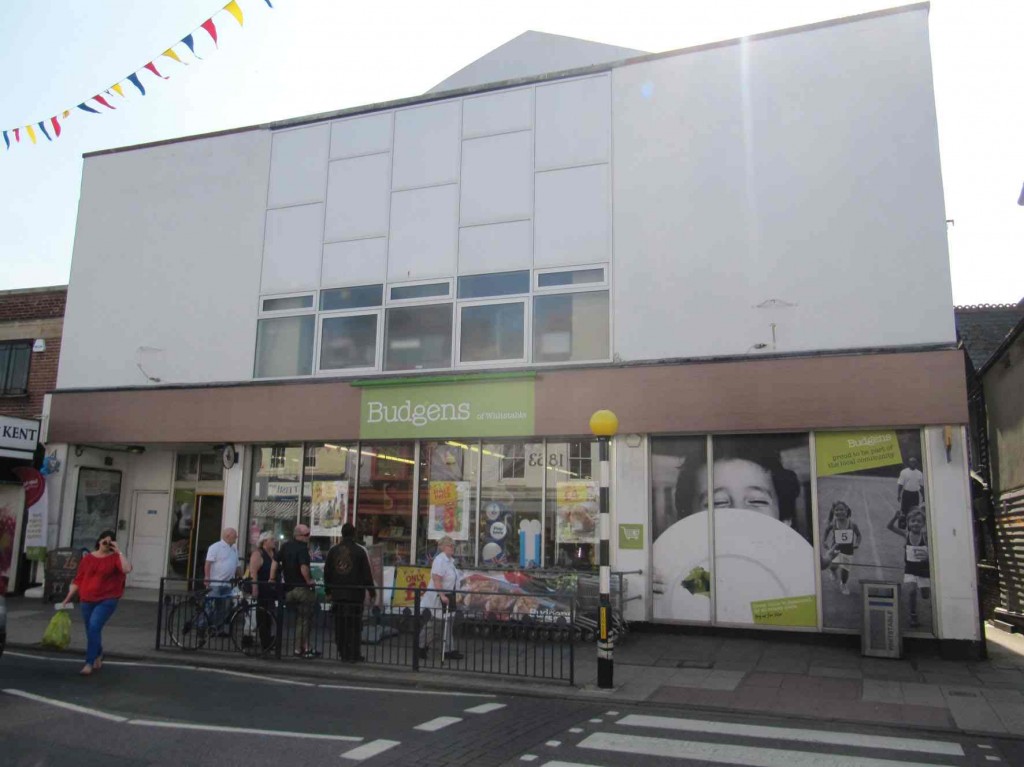 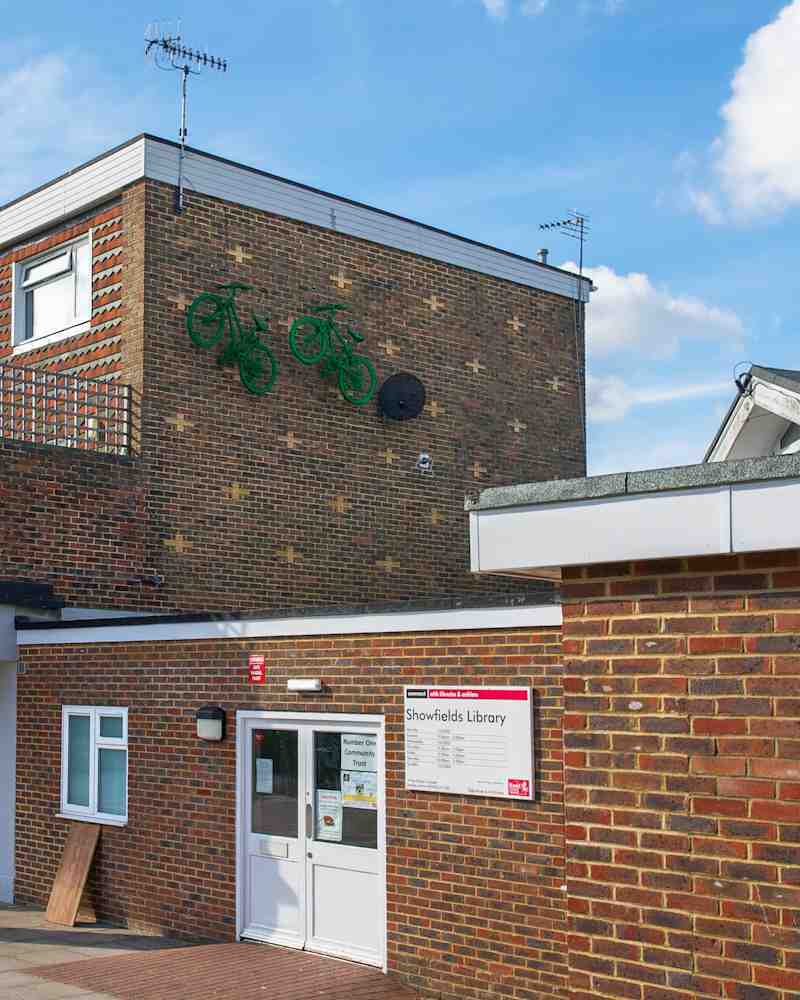 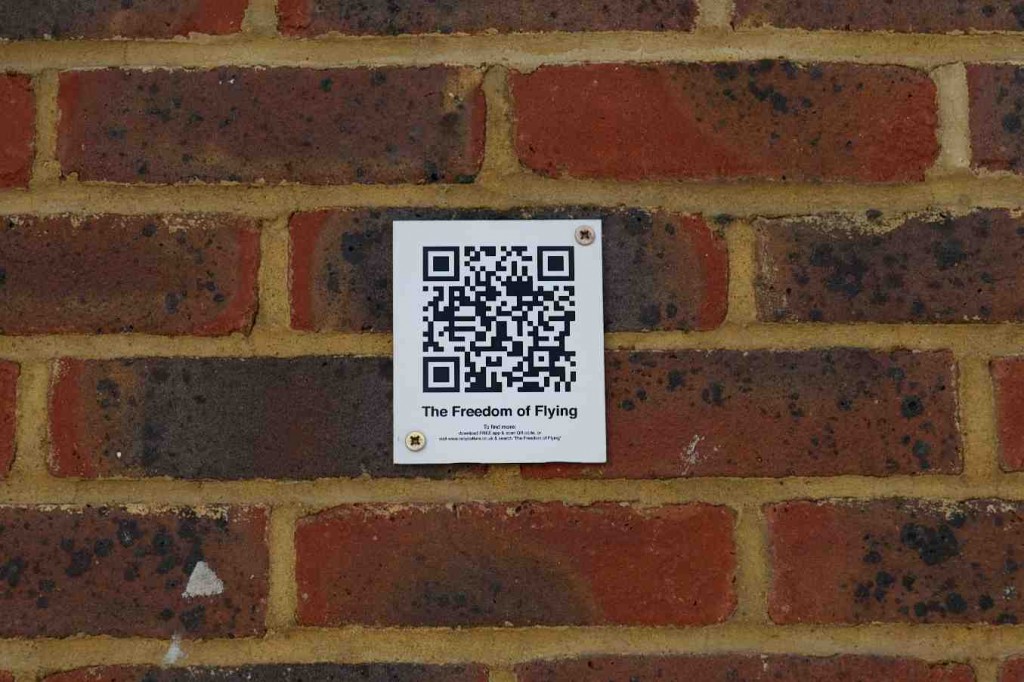 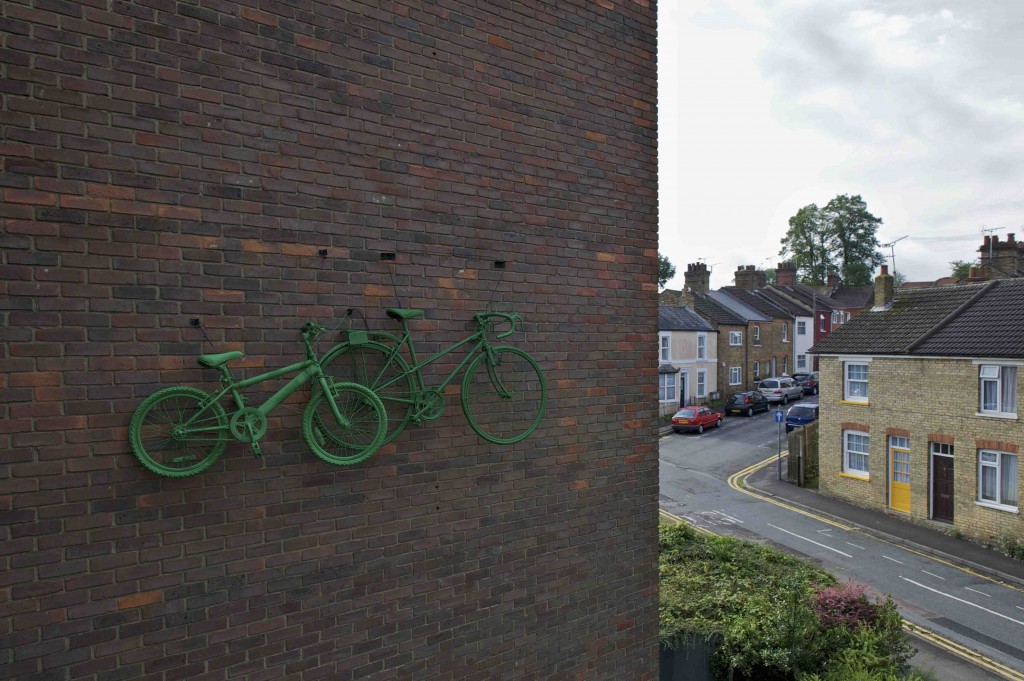 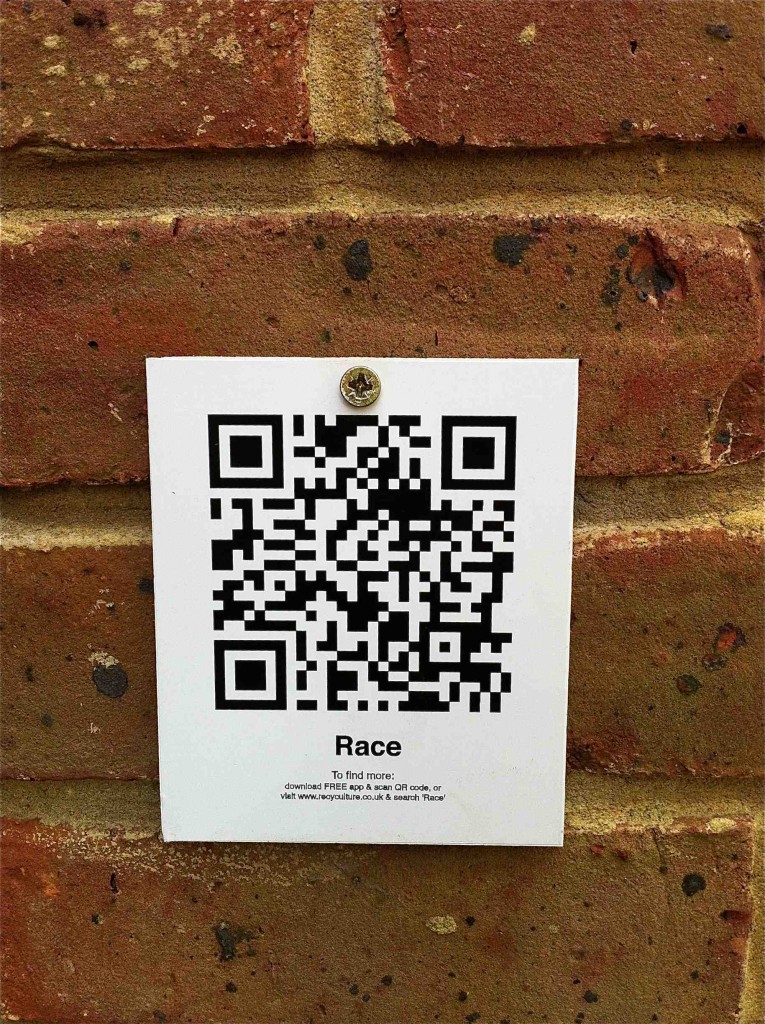 The seven green painted bikes reference the way that bikes grow and changes alongside their owners.  In parody of Shakespeare’s famous ‘Seven Ages of Man’ speech, the virtual installation charts the seven ages of bike in a poem by Chris Paradox. From three wheeled Christmas present, to wobbly steed without stabilisers; BMX trickster and the need-for-speed racer, to mountain bike and practical shopper, and finally back to three wheels.

The Installation
Lovin’ My Bike is on the facade of 7 Tontine St, Folkestone
People have fascinating relationships with their bikes. For some, their bike is a pure convenience, practical and free, getting them from A to B. Others guiltily neglect their bikes, abandoning them in sheds, gardens & bike racks. But for others, it’s a soul mate requiring tender maintenance and attention lavished on each part. Sometimes it’s a love/hate relationship, a torrid affair.
The two BMXs of this installation, of course, epitomise the latter, at least during people’s braver years! 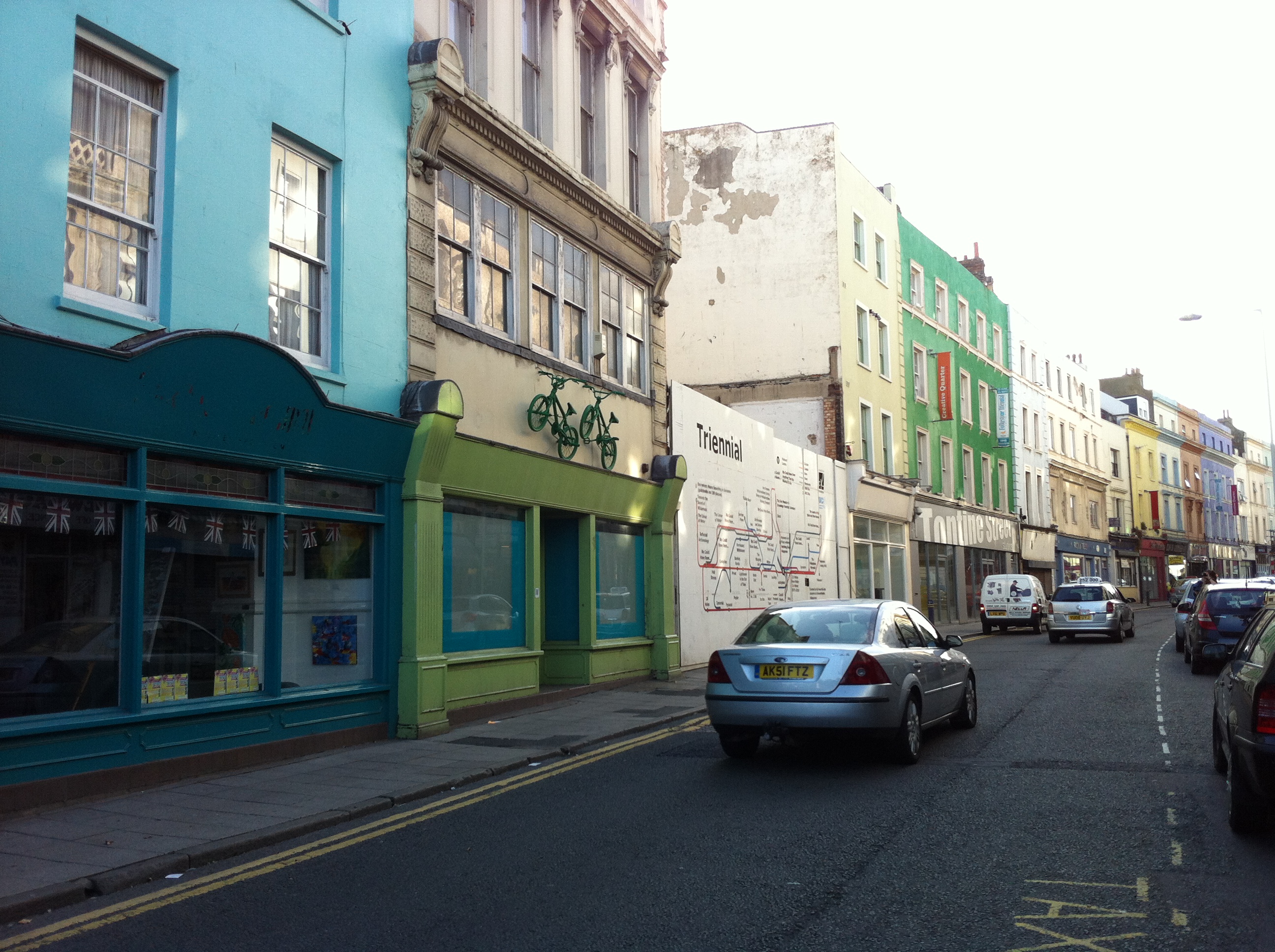 One man and his bike cycled the seven seas
Eleven thousand miles per year, the slowness of his speed
Five continents long, sixty countries wide and punctures untold
Across glacier, desert, mountain, forest he rode to break the mould.
Leaving port in Yorkshire towards Istanbul, he set his two wheeled boat
bobbing on the cresting waves of Europe past sheep and cow and goat
Consulting star chart and turning right at the Bosphorous, Cairo drew him on
And from there into deepest Africa to hear her silent primal song

From sunset in Sudan to sunrise in South Africa, on and on our rider rode
Rift valley, Jungle and Savannah succumbed to his adventure mode
Until from a Cape of Hope to one of Horn, a southern ocean was crossed
And deposited in Patagonia his soul became blissfully lost
Right up the spine of the Americas cycled our intrepid traveller
Across Andes, Amazon and a rather large canal in Panama
Through the lands of Inca and Maya and ancient Astec Empire
Taking on the force of Gravity with nothing but two skinny tyres

After many moons sunny California gave way to Canada and Tundra
And then the brutally beautiful frozen squalls of Alaska and Siberia
But this captain of his soul, survived the cold and arrive in ancient China
And surveyed the lush lowland rice paddies beneath the roof of the Himalaya
Crossing the immensity of Russia’s Steppe would transport him to the middle east
Where good Samaritans would invite him in and insist he sit and eat and feast
So, with a belly full of spices and riding the third of his cycling devices
The lighthouse of Europe guided him home to claim his inner prizes
The glorious self knowing of a solo circumnavigator
And the inextinguishable freedom of a two wheeled super cycler 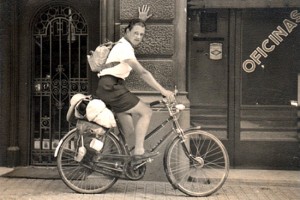 ‘On my tenth birthday, a bicycle and an atlas coincided as presents, and a few days later I decided to cycle to India’ Dervla Murphy

A few poems inspired by Cycling the Seven Seas, created in a workshop in Ramsgate, with the Poet Paradox

A Fair Weather Cyclist – Ray
I don’t care much for the commute or the shopper
Give me the heavy, no gears Chinese factory bike any day
And let me cycle through paddy fields
or follow the majestic Mekong River
And should my squeaky iron horse fail me along the way, I don’t care
because I know, just around the corner bike mechanics wait just there

Mekong Surprise – Karen
Bamboo fringed pathway on the Mekong
Strange temples & statues all along
The cool breeze of moving tames the stifling heat
But creaking wheels, no gears & agonising seat.
Flat tyre inevitability, but
Roadside bike shop to the rescue
Brake tied to frame with a strip of bamboo
Now peddling through jungle alongside of you
Onto the beech, sands stretching for miles
A sparkling bluest sea & the biggest of smiles.

Cycling with no puncture repair kit in Denmark – Marc
When I was 15, I was no fool
But no one wanted me at school
They didn’t want me, as it happened, at home
And so, I had license to roam.
Some friends from Denmark offered a base
And so with my bike, to Copenhagen I did race
I must admit I used the train
For cycling round Denmark was more than enough pain
Nobody worried I was unheard of for weeks, except by letter
A mobile phone might have been better
But clutching my youth hostel card
Cycling in Denmark was not hard.
They had lovely cycling paths
The hills were, compared with Britain, just laughs
The culture of the youth hostel varied land to land
with standards in Denmark that were very grand
The custodians were all too keen to speak
English, to a junior ‘freak’
I circumnavigated the entire archipelago
Of islands with names that do not rhyme
The apex was the island of Romo
Approached on a 10km causeway against a prevailing wind.
I got drunk with a lot of Germans
Ottos, Helmust and Hermans
We swore undying love
And I pushed back off to Copenhagen with a shove
I did not have one hairy moment in a 1000km trip
Nor one puncture, luckily, as I had no kit
And no knowledge of how to fix it

The Installation
Cycling the Seven Seas sat on the lookout rooftop of the Harbour Arm Gallery, Margate.
Four green painted bikes, point towards the horizon as if facing the four cardinal points of a compass.  The installation echoes Margate’s maritime history, facing outward to the world, in celebration of cycling across the globe. 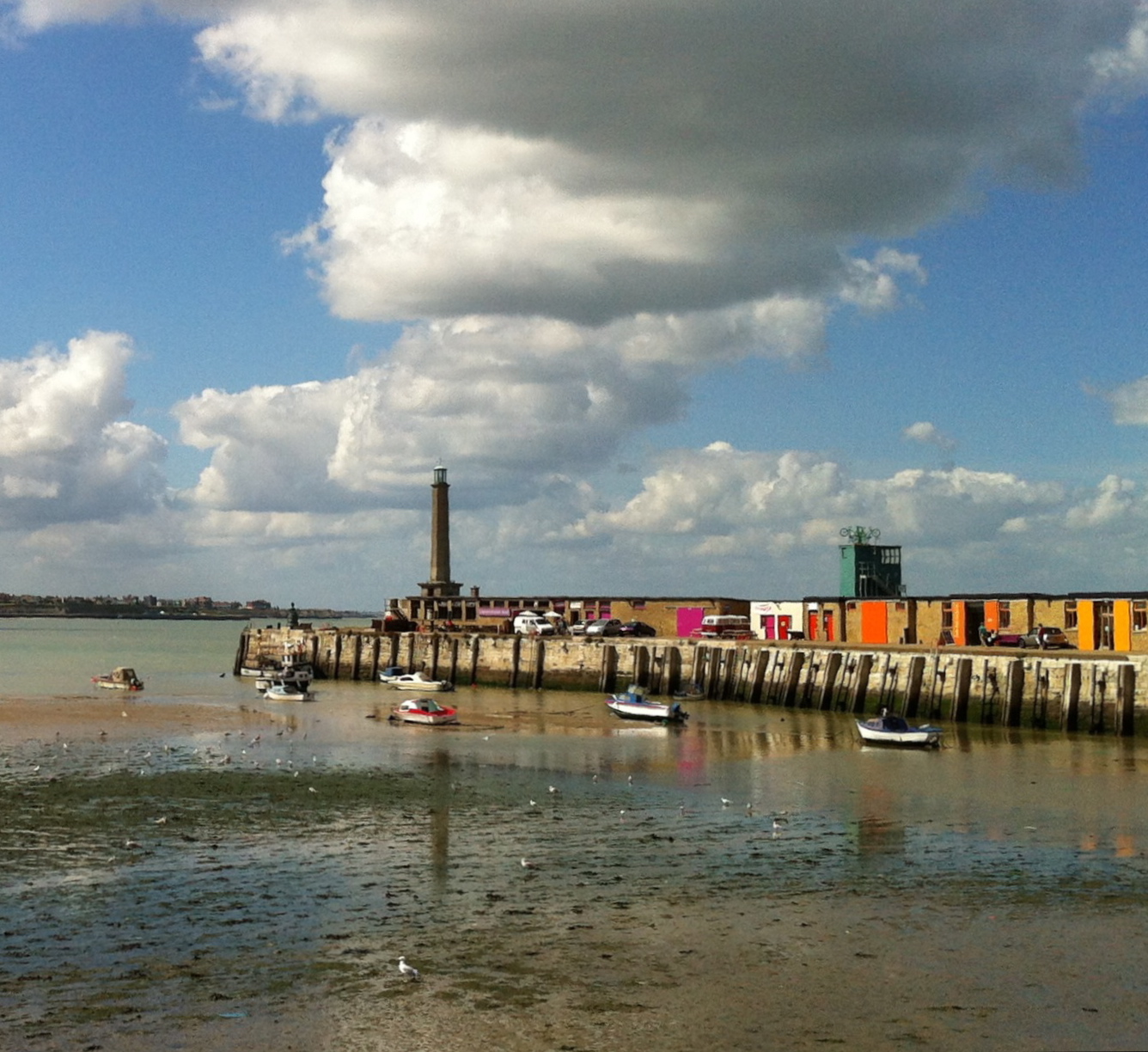 Life is like riding a bicycle. To keep your balance, you must keep moving – Albert Einstein 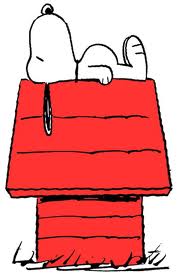 Life is like a ten speed bicycle.  Most of us have gears we never use – Charles M. Schulz